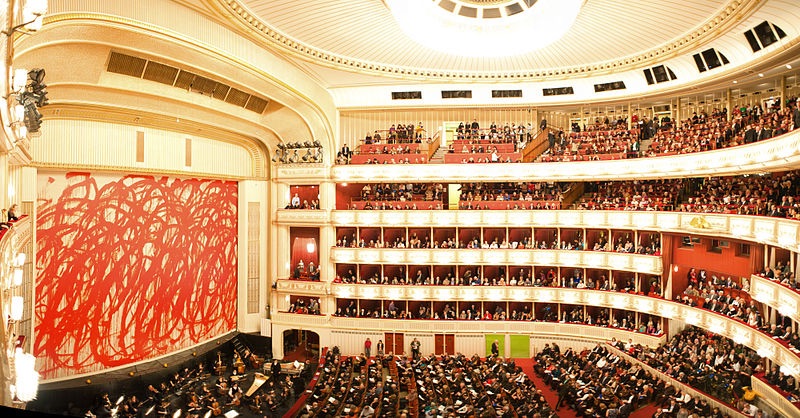 Here’s a picture of the Wiener Staatsoper (Vienna State Opera House), where Mahler was principle conductor when he wrote the Fourth Symphony.

“It [the fourth] is basically different from my other symphonies. But it must be that way; it would be impossible for me to repeat myself, and just as life moves on, I likewise explore new paths in every new work.”

Mahler’s Fourth Symphony is indeed a departure from his previous three symphonies, but it also shares a strong resemblance in its lineage. Conception for the Fourth Symphony began during the composition of the Third. Mahler had initially intended 6 movements, each titled and most coming from previous songs he had written. In the end, Mahler pared it down to four movements.

These four movements more closely follow the Classical style than the expanded programmatic form in vogue at the end of the 19th century in Vienna. The symphony opens with a sonata form, followed by a scherzo, a ternary slow movement, and a finale. The entire symphony, at a mere 52 minutes, is shorter than the opening movement of his Third. He even utilizes a much smaller orchestra than before or after, featuring a mere “four flutes, three oboes, three clarinets, three bassoons, four horns, three trumpets, percussion, and strings.”

Within this traditional Viennese structure, however, Mahler still shows his own style. The first movement, while in the sonata form, features not two melodic ideas, but six. With these six different themes, each with its own style, Mahler shows his Wagnerian lineage of leitmotif composition, overlapping them in different instruments to great effect.

Throughout all of Mahler’s symphonies, the use of art songs as a compositional bedrock is obvious, and despite Mahler’s insistence that the Fourth is different, the final movement uses his song Das himmlische Leben (“The Heavenly Life”).

Mahler’s Fourth Symphony is a unique blend of his past, present, and future compositions. For certain, however, it is purely Viennese.

We invite you to join us on February 8, 2020 for Mahler’s Fourth at the Alma Thomas Theater at Southwestern University.